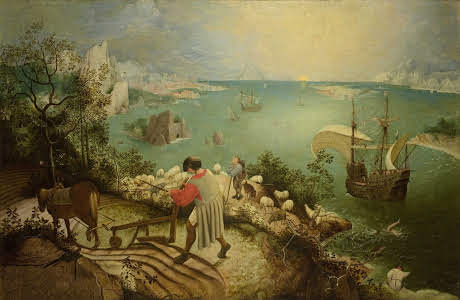 My friend Paul rightly took me to task this week for not crediting the painting of the Tower of Babal in my last blog, so retrospective apologies to the 16th century Flemish painter, Pieter Brueghel the Elder. He’s perhaps best known for landscape paintings such as “Hunters in the Snow”, which adorns many Christmas cards.

“Landscape with the Fall of Icarus” has a remarkably modern message; if it weren’t for the title, one might easily overlook the hapless subjects’ legs disappearing beneath the waves after his father’s warning against flying too close to the sun remained unheeded. There’s perhaps a look of mild surprise or puzzlement in the faces of the shepherd, ploughman and sailors but if they did notice the plumetting figure, they quickly returned to their tasks, indifferent to the drowning Icarus. Like the priest and levite in Jesus’s parable of the Good Samaritan, the farmers and sailors have things to do and places to go.

In his poem “Musée des Beaux Arts”, WH Auden makes reference to the painting with this insightful observation. It begins:

“About suffering they were never wrong,
The old Masters: how well they understood
Its human position; how it takes place
While someone else is eating or opening a window or just walking dully along….”

I once took the funeral of a young man who threw himself from the top of a carillon tower. His father read Auden’s poem, partly because he felt his son had metaphorically flown too close to the sun, but also because he felt others had been indifferent to his son’s needs.

Indifference to suffering has always been part of human history and with today’s ubiquitous and inescapable  media coverage of world events, we are even more likely to suffer from compassion fatigue. Painter, poet and prophet challenge us to be prepared to step aside and help those we meet along our paths.